In defence of obscure words 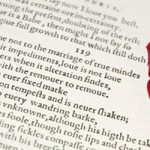 Do you know what these words mean: sesquipedalian, desiderata, milt, ineluctable, modality, argot, grue, heliotropic, solipsism? Would you be put off reading something if a writer had you reaching for the dictionary? If that is the case, you could be missing out on Nabokov, Joyce and Will Self. Self explored the contrasting attitudes that have developed over the 20th century to the ‘difficult’ issues of censorship and art in the BBC’s A Point of View recently.

We chase “fast culture” at our peril – unusual words and difficult art are good for us, says Will Self.

We are living in a risk-averse culture – there’s no doubt about that.

But the risk that people seem most reluctant taking is not a physical but a mental one: just as the concrete in children’s playgrounds has been covered with rubber, so the hard truth about the effort needed for intellectual attainment is being softened by a sort of semantic padding.

Our arts and humanities education at secondary level seems particularly afflicted by falling standards – so much so that universities are now being called upon to help write new A-level syllabuses in order to cram our little chicks with knowledge that, in recent years, has come to seem unpalatable, if not indigestible – knowledge such as English vocabulary beyond that which is in common usage.

Both general readers and specialist critics often complain about my own use of English – not only in my books, but also in my newspaper articles and even in radio talks such as these. “I have to look them up in a dictionary”, they complain – as if this were some kind of torture.

In over twenty years of publishing fiction and journalism, I’ve become pretty much inured to these slings and arrows, regarding them as par for the anti-intellectual course. I used to remonstrate with those who raised the S-word (S being for sesquipedalian, an obscure word that means ‘a lover of obscure words). I’d point out that my texts were as full of resolutely Anglo-Saxon slang as they were the flowery and the Latinate. I’d observe that English, being a mishmash of several different languages, had a large and exciting vocabulary, and that it seemed a shame not to use it – especially given that it went on growing all the time, spawning argot and specialist terminology as freely as an oyster does its milt.

Will Self is a novelist and journalist.
A Point of View is usually broadcast on Fridays on Radio 4 at 20:50 BST and repeated Sundays, 08:50 BST.

One thought on “In defence of obscure words”