After the first episode of The Secret, I needed persuasion to watch subsequent ones. Its depiction of evangelical zealots was painful and embarrassing to watch and made me angry all over again. The religious fellowship it portrayed could well have been the one I was brought up in, where Fanny J Crosby’s I am Thine, O Lord, the hymn accompanied by acoustic guitar in the opening scene, was an old favourite. 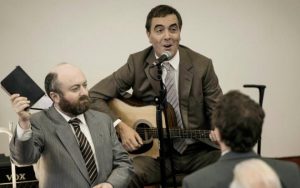 In spite of my revulsion, I ploughed on with the adaptation of Deric Henderson’s book Let This Be Our Secret because I hoped that a dramatic portrayal of a cultish community I’d experienced could offer the real redemption this brand of religion ironically offers but so resolutely denies its disciples.

I cringed, I scoffed, I cried, I pitied and I laughed triumphantly. It wasn’t so much a tragedy, as it was biblical. If you begin to think the values of these lives are far-fetched or laughable, you only have to remind yourself that the story is true.

Middle-class affairs aren’t uncommon, but the backdrop to this true-life double murder in Coleraine, Northern Ireland has a sting in its tail, not least insofar as their crime went undetected for 18 years, neither of the devout evangelicals, dentist Colin Howell and Sunday school teacher Hazel Stewart, have shown any sense of remorse or repentance for their meticulously planned crime in the intervening years, and she still protests her innocence after three appeals while he has recently collapsed after being on hunger strike.

Howell was a charismatic narcissist, a compulsive liar and a hypocrite. He sexually abused sedated patients, lost his son in an accident, developed an addiction to pornography, and lost £350,000 in a bogus scheme to recover Japanese gold in the Philippines, using money he acquired from his murdered wife Lesley’s will, the estate of her father, a life insurance payout and an endowment policy. Had he not apparently broken down and eventually confessed his own crime, he and Stewart, the ‘elegant cop’s wife’, could both still be at large.

During the 20 years I was involved in the Elim Pentecostal Church during the 70s and the Charismatic Movement of the 80s, I met a man I now know was a paedophile, adulterers, fantasists and narcissists, and at least one person who, like Howell, excused his indulgent lack of self-control and sexual abuse with a creepily lascivious admittance that he was a sinner in need of ‘divine’ forgiveness and guidance. He boasted to men friends that he had touched every one of his wife’s friends while they slept. He displayed the same traits of delusion as Howell and Stewart while persistently ‘searching’ for god’s spiritual guidance. Such pernicious cognitive dissonance relies on the lack of agency trope that threads itself through so much of religion and the self-absolution I believe Paul the Apostle dubs ‘licence’. Clerics secretly collude with their laity through internal systems of discipline that circumvent the law. These are the underpinnings of the belief some have that they are above the law because god.

The ‘drug fucking’ in episode 3 was a pivotal scene. Another example of assuaging guilt, it demonstrated in dramatic and human terms the lengths to which each of them was willing to go in their delusional bubble. They steeped themselves in the theme of the religious bond, which extends to the spiritual and sexual, that formed part of their story throughout. The blood of the Lamb and the Bride of Christ are recurrent motifs in this sect. There are similar themes in classical drama and some might call this modern example comical, but others of us know it to be too realistic. I wonder if it meant as much to people who haven’t experienced this type of religious thinking, where you believe the bible is the literal word of god.

The most vicious sting in the tail was Howell’s final act – his courtroom take-down of Stewart. Whatever we make of her part in the sorry episode, it’s a salutary tale of dancing with the devil. “Hazel and I were waltzing together,” he said in the witness box. “I may have been the lead partner but Hazel was dancing in co-operation.”

Howell and Stewart may be deluded, sick or in need of help, but theirs was not a victimless crime. Mercy and justice are at the heart of the Evangelical tradition but my sympathy for the children made me feel no less relief that they, like any other murderers, appear to have got exactly what they deserve – 21 and 18 years respectively. My abiding feeling, however, is that if it hadn’t been for their religious ardour, maybe they could have allowed themselves to indulge their secret passion without the need to justify their weakness or assuage their guilt, thereby allowing Lesley Howell and Trevor Buchanan to live to tell a not quite so sordid tale of their partners’ love affair.