I wish Russell Brand would just piss off. He has no answers, he just whines on and on in his shabby nasal self-importance. Has he got a booky wook out or something? I can’t bring myself to Google it in case he or his avid publicists think I give a shit.

Now I think about it, though, it’s no real wonder that he’s sucking up airtime and column inches criticising those who have at least tried to make a difference to society rather than squandering their time and energy flouncing around mocking and belittling other people. It’s just the same old dog returning to its own vomit.

Pseudo-intellectual adolescent claptrap from a very rich 38-year-old man, more like the very people he’s whingeing about than any of the people he’s supposed to speak for, is the last kind of advice or support I want. Byronesque? Don’t make me laugh. You never have before, you vacuous twat. A foppish haircut, a messianic beard and a dandy manner neither a poet nor a prophet make. 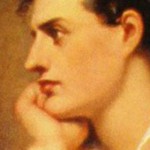 Here’s a bit of advice from Byron’s preface to his Hours of Idleness: ‘In submitting to the public eye the following collection, I have not only to combat the difficulties that writers of verse generally encounter, but may incur the charge of presumption for obtruding myself on the world, when, without doubt, I might be, at my age, more usefully employed.’

Rather than entertain his latest histrionics, have a look instead at this brilliant piece on Russell’s brand (!) of brocialism.* I don’t always agree with Laurie Penny, but at least she does usually have something interesting to say.

* I had to look it up. The word brocialism, briefly, describes a hipper type of sexism, the word being coined to describe the ‘sexist-socialist’, along with manarchist which is the equivalent term for the anarchist strand of male privilege. Before anyone starts throwing stones at the left tho, don’t forget that the right don’t really need these neologisms, do they?