The radical idea of sharing 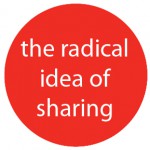 As gutted as I am about #GE2015 and what it will mean for me, my job, my home, my children and my grandchildren, and the millions of other ordinary people who live in this soulless country, but who are not wealthy or who don’t think that life is a cost-benefit analysis or who actually understand the difference between being a socialist and voting Labour, the country has voted the Tories back in by quite a wide margin – and that’s democracy, which is the most important thing here, in its current form. We all get a vote and some have used theirs to put people like me in their place. I have personally felt very vulnerable to attack over the last five years and I can only hope that the next five won’t see me unemployed and potentially losing the home where I brought up my family.  If it does, it will be my ‘socialist’ friends I go to for help, not anyone who didn’t show any concern for my interests before.

The silver linings are that some of the more obnoxious MPs, Farage, Galloway and McVey, have gone and Brum has kept all its Labour Party seats and gained one from the Lib Dems. The icing on the cake is that I now have a Labour councillor in my ward and he is one of the most decent people I have ever met. I am proud to say I’ve worked with him and supported his campaign for the last four years and we have made it at last.