Human rights are founded on respect for the dignity and worth of each individual, regardless of race, gender, language, religion, opinions, wealth or ability and therefore apply to every human being everywhere. 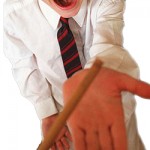 I often wonder why it is strapping men in their 30s and 40s who want to justify the idea of inflicting pain on small children. Since I wrote about David Lammy’s lamentable attitude to children a couple of months ago, Toby Young has come out as being all in favour of reintroducing corporal punishment to his free school, not only in the form of smacking, but also use of the cane.

He said: “I can imagine circumstances in which beating a boy…would be preferable to expelling him, for his sake, rather than the school’s.” He rules out ‘beating’ girls.

What Young is essentially saying is that, if it were legal and you were to send your child to his school, you would risk that child being thrashed with a wooden stick. I can imagine no circumstances in which it should actually be respectable to say I will use physical violence against a child. In what other circumstances would it be permissible for you to agree to this treatment of children in your care?

Thankfully, mercifully, it is not respectable nor permissible for these actions to take place.

Corporal punishment was outlawed in state schools in 1986/87, under a Tory government. The ban was extended to independent schools under Labour in 1998/99 in England and Wales* on a majority of 211 to 15, by no means a partisan vote.*

Tellingly, it was Christians who were still trying to bring it back in 2005, going as far as the European Court, because it infringed their ‘freedom of belief’ – something the religious are still using to insist that their own views, seen by others as abusive, promoting inequality and barbaric, are superior to the mainstream wishes of modern society.

Continuing the religious exemption theme, the ban doesn’t cover ‘supplementary’ schools such as Sunday schools where children attend for less than 12.5 hours per week. We’ve seen today the outcome of the controversy over physical abuse in madrassas and some suspect there is fear of upsetting the sensitivities of some Muslims.

Contrary to the usual platitude that people trot out, harm has been done to several people I’ve spoken to. They are resentful and angry and it takes time to forgive what they see as exploitative abuse, albeit in some cases the chastisement having been ‘mild’.

The American Psychological Association opposes the use of corporal punishment in schools, juvenile facilities, child care nurseries and all other institutions, public or private, where children are cared for or educated. It asserts that, although corporal punishment can produce immediate compliance, it is violent and unnecessary, may lower self-esteem, and is liable to instil hostility and rage without reducing the undesired behaviour.

The APA’s concern is that to resort to corporal punishment is to reduce the likelihood of using more ‘effective, humane, and creative ways of interacting with children’. Corporal punishment intended to influence ‘undesirable responses’, they say, may give the child the impression that s/he is an ‘undesirable person’, thereby lowering self-esteem.

They go on to add that because children learn by imitating adult behaviour, the use of corporal punishment is likely to train children to use ‘physical violence to control behaviour rather than rational persuasion, education, and intelligent forms of both positive and negative reinforcement’.

The UN Convention on the Rights of the Child 1989 was the first legally binding international instrument to cover a child’s full range of human rights – civil, cultural, economic, political and social. It was decided that children needed a special convention because people under 18 need a particular type of care and protection that adults don’t. Moreover, world leaders wanted to ensure that we recognised that children have human rights too.

It sets out in detail what every child needs to have for a safe, happy and fulfilled childhood. Article 19 of the Convention [pdf] states: ‘Governments must do all they can to ensure that children are protected from all forms of violence, abuse, neglect and bad treatment by their parents or anyone else who looks after them.’ Article 12 [pdf] adds: ‘Every child has the right to say what they think in all matters affecting them, and to have their views taken seriously.’

So ask them. Shall I hit if you step outside my parameters? Or shall I explain, cajole and nurture you into becoming a sociable human being and a valuable member of our society? I know what I’d have said: ‘I don’t really know what you mean, but please don’t hit me.’

Corporal punishment, or ‘beating’, is the lazy approach to childhood discipline. The APA goes on to say that the effective use of punishment requires precision – in timing, duration, intensity and specificity, as well as considerable sophistication in controlling a ‘variety of relevant environmental and cognitive factors’. It maintains that these factors are unlikely to be given due attention in institutions and thus corporal punishment is ‘likely to instil hostility, rage, and a sense of powerlessness’.

The deliberate infliction of pain among adults is usually seen as uncivilised and exploitative. Why then is it the best method of correcting the most vulnerable members of our society? Because you can? Because they’re not big enough to fight back? Because the police won’t come and arrest you?

Judicial corporal punishment was abolished in this country in 1948. It is no longer acceptable to see violence against women as just a ‘domestic’ in which police will not intervene.

Most of us pay at least lip service to the idea of ending violence against children, whether perpetrated by parents, relatives or others. We say we want every child to have that safe, happy and fulfilled childhood. But while we find it socially acceptable for grown men to hit or want to hit our children, I fear we have a long way to go.

*CP was banned in 2000 and 2003 in Scotland and Northern Ireland respectively.

Update: Chris Grayling added his voice in Feb 13 by defending parents’ right to smack children. Odd then that he’s happy for rapists to get off with a caution.