Sic! The illiterati are out in force 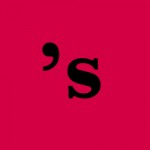 Waterstones has outraged the grammar police by dropping the apostrophe from its logo. The Twittersphere is ablaze with the defence of a punctuation mark that Boots, Morrisons, and Debenhams seem never to have bothered with.

A controversial decision by the bastion of the book lover’s world spelt out with a neologism, a sentence ending with a preposition, and a serial comma.

The proofreader’s world is a tricky one. Grammar and punctuation, unlike spelling, are very definitely a set of fluid guidelines designed to aid our understanding of written communications, not constrict us all into a pedantic apoplexy. Did you know, for instance, that the ampersand used to be the 27th letter of the alphabet and is a contraction of the phrase ‘and per se and‘?

Making its announcement, Waterstones said, “It also reflects an altogether truer picture of our business today which, while created by one, is now built on the continued contribution of thousands of individual booksellers.” That raises for me the question of whether I should in future refer to Waterstones’ books. The apostrophe question is undoubtedly not going to end today. Did you know that the beleaguered squiggle has a protection society all of its own?

Waterstones are actually leading the way in defying a community of editorial and proofreading unbelievers, but some of the commentary surrounding their cutting-edge decision reminds me that it is often those less qualified to judge who are the most vociferous. Ignorance is never bliss, but it sure is funny. Consider the ‘student of the english language’, the woman whose life, no less, has been ruined by the ‘barbaric’ nature of the affront, the constant positive references to Sainsbury’s and MacDonald’s as arbiters of the English punctuation system, or the, hopefully ironic, use of the term ‘it’s apostrophe’.

There is an apparently paradoxical phenomenon whereby people tend to hold ‘overly favourable views of their abilities in many social and intellectual domains’ that was posited by David Dunning and Justin Kruger in 1999. Pretty late in the history of mankind for the naming of an effect recognised by Charles Darwin and Bertrand Russell. 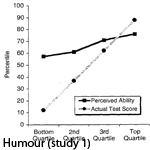 Russell famously said: “One of the painful things about our time is that those who feel certainty are stupid, and those with any imagination and understanding are filled with doubt and indecision”, and Darwin’s The Descent of Man includes the lament: “but ignorance more frequently begets confidence than does knowledge.”

The Dunning and Kruger paper Unskilled and Unaware of It: How Difficulties in Recognizing One’s Own Incompetence Lead to Inflated Self-Assessments opens: “not only do these people reach erroneous conclusions and make unfortunate choices, but their incompetence robs them of the metacognitive ability to realise it.” In other words, they make self-reflective errors of cognition about their own cognition; or they are unknowing about their unknowing. 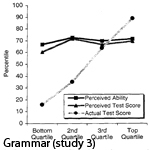 The authors, then at Cornell University, found across four studies that, regardless of gender, participants who scored in the bottom quartile on tests of humour, grammar and logic grossly overestimated their performance and ability. They estimated their scores to be in the 62nd percentile, while reality put them in the 12th.

Several Dunning-Kruger analyses linked these mistakes to a lack of capacity to distinguish between accuracy and error. Paradoxically, they say, improving the skills of participants, and thus increasing their metacognitive competence, helped them recognise the limitations of their abilities.

So, next time I’m reading a poorly phrased speech, an inarticulate article, or a badly punctuated story, I’m going to try to remember to be humble. After all, it could be me.

(Dunning and Kruger were awarded the 2000 Ig Nobel Prize in Psychology for their report.)