Our Dad – our hero 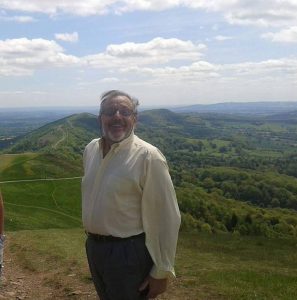 Written by Michelle and Nicky on behalf of the family

We chose to display this photo of Dad today because we all felt it summed him up. He was a proud man with a silly sense of humour – his ‘Grandad jokes’ always made us groan, but that made him laugh all the more at us.

His three grandsons, Josh, Nathan and Joel, took their Grandad to his beloved Malvern Hills for his 75th birthday. He and they were all delighted to be able to say that he chose the difficult route to the top despite some difficulties he had walking. This funny, proud pose is the one he struck when Josh said, ‘Give us your birthday pose, then!’

As well as his ability to crack a joke, this photo also shows Dad’s pride. He was proud of his family: his wife, his children, his granddaughter and his three grandsons; and he was chuffed to pieces with his two great grandsons.

Mostly though, we hope Dad was proud of his achievements.

He was born Thomas Edward Nixon Graham on 30th May 1937 in Belfast. He came to Birmingham with his parents before he started infant school. He was always known as Nixon and he had anything but an easy life.

In fact, he had what experts now call a ‘chaotic lifestyle’, which resulted in him being in a children’s home with his younger brother and sister Dennis and Pauline for a year when he was eight.

Most of Dad’s formative years were spent on the streets or in state institutions and he ended up spending five years between the ages of 10 and 15 in a residential approved school for ‘delinquent children’ for a crime he didn’t commit – although he did admit to stealing the jam from the school tarts, and milk and bread on one occasion when he ran away! His stepdad once found a suitcase full of books under his bed – all stolen from a bookshop on his way home from school!

Dad’s youngest sister June was born much later, but there were also siblings Dad didn’t meet till he was in his 50s. We believe there was one sister he never got to meet, but he had fulfilling, albeit short, relationships with Jean and her children, and Gillian once came over from Canada to meet them all. He was delighted to have had those opportunities to reunite with his family and spend time with them.

When we contacted Gillian last week, she sent this message: ‘Wishing Nixon bon voyage in his next adventure. I salute you my Brother, and we shall know each other better when next we meet.’

Modern experts fret, justifiably, about children like Dad – all the early indicators predicted an adult life of absolute failure.

But our Dad had ambition and vision – for himself and for his family. He was a man of principle – he never smoked, he didn’t drink alcohol and he didn’t swear. And Dad always loved reading and learning – as witnessed by all those stolen books!

His life was turned upside down at 21 when he met Mom at the local Pentecostal church after he left the Army’s Royal Electrical and Mechanical Engineers Unit. She was quite cool towards him initially, but he assured her that ‘love begets love’. By the time he was 28, he and Mom had four children under the age of six.

Life was still pretty difficult. They had their trials and tribulations, but Dad’s devotion to Mom kept them together and saw them through difficult times.

Dad discovered a nurturing love and commitment for his four children that he had not known himself as a child. And regardless of any financial hardships we endured, Dad passed on priceless life values to us – he taught us self-belief, dignity and loyalty. He taught us that our humble beginnings did not define who we were and that the limitations of our childhood should not confine our futures. He taught us that we were equal to anything we set our hearts and minds to do.

As second generation Irish immigrants, we lived in the Balsall Heath slums that were soon to be condemned as unfit for human habitation in the 1960s, but Dad used to take us into town to British Home Stores and Marks and Spencer to buy our clothes. Despite not always having a lot of money, he bought us the very best he could afford and ensured we were the best dressed kids in the street.

I remember seeing my snooty French teacher in the top-floor restaurant of British Home Stores once when Dad was buying us dinner. It was the first time I’d tried lemon meringue pie. I was a bit awe-struck when I saw my teacher in the same shop as us. She spoke very properly and had once laughed at my accent in class; she’d travelled the world and been to Paris; and she was married to one of the professors at the university. That day, I realised that although she might look down on me, my life was just as worthwhile as hers.

Dad was quite strict as a parent and he taught us by example that if we studied and read, we could make something of our lives. I still find myself today saying to people, ‘My Dad told me that.’ When I was telling a friend who’d only met Dad a few times about what had happened, he said: ‘I always got the impression your Dad was a giant of man.’

I remember the six-volume Children’s Encyclopaedia, bound in smooth imitation leather, that we had next to the fireplace. Each one was a different muted colour of orange or green or red and I’d sit and flick through the illustrated pages, which seemed so full of mystery, discovering things about the world. I still remember the picture of a pelican with a caption telling us that its beak could hold 40lbs of fish and the illustration for Dickens’ novel The Old Curiosity Shop that always reminded me of staring into brightly lit sweet shops at Christmas.

I remember Dad taking extra-mural classes at Birmingham University and when his granddaughter Jo went to university, he bought all her text books. He was as proud as punch when she got her first-class honours degree this year, the first in his family to achieve that.

Before that though, when the realities of my own family life had become difficult, Dad took all three of us on. He, and Mom, drove everybody mad when they talked like babies for a year after Jo was born! I’ve still got the nursery rhymes they bought on a set of cassettes. By the time Josh was born, they were playing them relentlessly in the house and in the car.

Dad treated my children like his own. He, and Mom, took us on holiday all over the country, they helped me financially and supported me when I went back to studying.

He used to take Jo for little walks by the nearby brook and teach her things the way he’d taught me. There has never been anyone quite like Grandad as far as Jo’s concerned. And Mom takes delight in telling the story of how Josh once looked up at Dad and told him he’d taught him everything he knew. They feel they’ve lost not just a Grandad, but their Dad too.

In addition to his main job in the Selly Oak Hospital theatres, Dad built up a part-time window cleaning round. When Josh got to 14, Dad took him out and taught him the discipline of routine and commitment in preparation for his working life. The early morning fry-up was an incentive, but I was always amazed every Saturday when Josh got up at 6am to go out to work with his Grandad. I probably hadn’t realised that being with his Grandad was the bigger incentive.

Then Dad took each of his other grandsons, Nathan and Joel, under his wing as they got to about 14 and they’d all set out as a team every week.

Dad would be the first to say that he wasn’t perfect. Everyone knew he was sometimes bad-tempered. He didn’t always get things right.

But anyone who could see past that knew that he was a man of integrity, devotion, loyalty and love. He did his very best and always tried to do the right thing. He always acted out of genuine sincerity.

Dad was never happier than when he was with his family. He loved birthday meals, family outings and holidays. And he was fearless when it came to protecting us. I remember occasions when he defended us against unfriendly dogs, friends’ parents, and once a swarm of bees on one of our Malvern walks.

He took his little troupe under his wing and showed each successive generation that we were special. He grew into a man who spent his life caring for three generations of children.

There are a lot of boys in Dad’s family, but his one granddaughter Jo is currently keeping the Graham family going. Dad was devoted to her boys, his two great grandsons. Four days before he died, he was crawling around on the floor with his 8-year-old and 3-year-old great grandsons playing and giggling with them because he loved to make them laugh.

And despite being 79 and suffering from failing health, Dad used to look after my garden. I’d leave him a cup and a teabag with a few biscuits and he’d mow the lawn or trim the hedge. He chose and planted a rose for me and pruned the honeysuckle and the buddleia every year. He and Mom had mown the lawn just the day before he died. I wish I’d been there that day to tell him one last time that I love him.

When Dad decided to find out a bit more about his family heritage, he had discovered that our distant past is in some way related to the Scottish clan ‘Graham of Menteith’ and our motto is ‘Ne oublie’, which means ‘Do not forget’.

We are the people we are today because of the love and utter devotion Dad showed towards his family. Anyone who met him could tell you that he was a lovely, kind, generous person who was devoted to his family. All of us will miss him more than our words can possibly convey.

Dad, we hope you are somewhere you are happy and the sun is shining. If you can hear us, we want you to know above everything else that we love you. Your death has left each one of us heartbroken and devastated and we will never forget you.

To a devoted husband, Dad, Grandad and Great Grandad – our hero.