Like most people, when I saw this I smiled knowingly without looking much further than the joke’s obvious intention, but language pedants have been pointing out that the joke in fact is on the originator since it relies not on a grammar gaffe but a spelling slip. 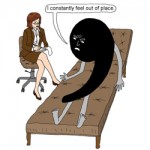 The word grammar can be understood both colloquially and as linguistic/academic jargon. But there’s something beyond those uses that takes in the idea that both are valid and it’s these layers of understanding that make language so interesting.

To most of us, the word grammar encompasses everything we learn about language – things like word order and sentence structure, verb agreement and tense, spelling and punctuation. It’s used in a variety of ways: I get called a grammar geek, some people go to grammar schools, linguists study grammar, the BBC’s guide to sentence grammar includes advice on punctuation, and I learned a grammar when I studied computer programming.

Wikipedia describes grammar as the set of rules that govern the composition of words in natural language, adding that linguists wouldn’t normally include ‘orthographical’ rules, such as the spelling, capitalisation and punctuation that we use in writing. Oxford’s online dictionary definition doesn’t mention spelling or punctuation. The grammar joke in question plays on the complexities arising out of converting speech into written forms of communication: it only works in print.

One of my reference books on the English language is New Fowler’s, which is described as a ‘guide to usage’ and is anything but a list of prescriptive rules. It instead attempts to catalogue examples of use rather than list a set of dictates to be followed. This fluid attitude to language reflects the changing nature of grammar – and orthography. Grammar has evolved through use and population changes, particularly migration, but a deterministic ‘correct’ use can develop out of our attempts to document a codified system. Punctuation has been influenced by technology – its use was minimised in the 50s and 60s because the commas and full stops took up the same amount of expensive typewriter ribbon as a capital letter. To add to it all, confusion arises if we conflate the preferences of a style guide with more authoritative resources.

The great language philosopher Wittgenstein himself moved from meaning as representation to meaning as use, away from the concept of an objective dogma towards the open possibilities of language and the meaning of a word as ‘its use in language’. Stanford Encyclopedia of Philosophy says of Wittgenstein’s language-games: ‘[T]he concept of language-games points at the rule-governed character of language. This does not entail strict and definite systems of rules for each and every language-game, but points to the conventional nature of this sort of human activity.’ Convention and tradition depend on context.

To put this trivial little ‘grammar’ joke on trial is to ask ourselves something in the court of human opinion in which the hypothetical ‘man on the Clapham omnibus’ proves apt.  The legal meaning of this term is a person who is educated and intelligent, but not specialist, and represents reasonable and rational thought and is used to decide whether a party has acted in a way that a reasonable person should.

An understanding that goes beyond literal interpretation underpins a much deeper grasp of the way in which we use language to communicate.  So, whose (!) sneering now?

Update: The Oxford online etymology of grammar is: via Latin from Greek grammatikē (tekhnē) ‘(art) of letters’, from gramma, grammat- ‘letter of the alphabet, thing written’.