From the wallet to the ballot 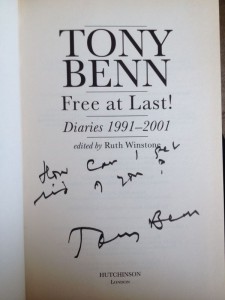 A transcript of a video interview with Tony Benn from The Guardian in which he discusses democracy:

I think every single issue that exists today about democracy and throughout history is summed up in the Putney debates. It is a timeless debate. And every time you read it, you see something new that relates to contemporary arguments…whether it’s about property or rights, who’s entitled to vote, every one of these questions is still relevant.

Democracy is the most revolutionary idea because democracy transfers power from the market place to the polling station, from the wallet to the ballot. And if the poor can buy with their vote what they can’t afford personally, it absolutely changes society.

I think it’s questionable whether in either America or Britain we have a democracy really. I mean in the United States, an old friend of mine, a former Democratic governor of Ohio, my wife said to me when I last saw him, ‘You’ll never have democracy in America while big business buys both parties and expects a pay-off whichever one wins.’ And the power of the President, particularly since 9/11, has been very, very formidable.

And so, in a sense, I think democracy’s still very controversial everywhere in the world.

I think the other thing I’ve learnt from all this is (I’m not an historian or an academic in any way), every generation has to fight the same battles again and again and again. There’s no destination called justice or democracy and if you catch a train driven by the right man you’ll get there. Every generation has to fight it. That ‘s the interest of the Putney debates and the English revolution: that we can draw from debates long before we were born things that are relevant to us and will be equally relevant to grandchildren.