Democracy: what is it good for?

I’ve talked to a lot of people in the last few weeks who think politicians are all the same and it’s just not worth bothering to vote.

Research published this week shows that young people in particular have little faith in the political class who, they feel, pay more attention to big business (59%), pensioners (17%), homeowners (11%) and even celebrities (10%) than they do to young people themselves.

This disaffection may explain why only 41% of first-time voters say they will definitely vote in the general election next year compared with three quarters of those aged over 60 who, unlike other groups, turn out in force whenever polling stations open.

…it also presents a challenge to young people themselves. Politicians are far less likely to pay attention to a group that will not vote.

Steve Ballinger of British Futures, the independent thinktank who published the report, says: ‘The report sends a clear message to political leaders, who must reach out to young people with policies and arguments that appeal to them.

‘But it also presents a challenge to young people themselves. Politicians are far less likely to pay attention to a group that will not vote.’

The disconnect between the Westminster village and young people is further demonstrated in figures showing that 58% don’t believe that the prime minister or his deputy understand their concerns. Young people see their democratic representatives as a privileged political elite, out of touch with the issues that they care most about: the economy, jobs, housing and education.

And these are issues we can all get behind because they touch all our lives in the form of the new council tax, unaffordable rents, youth unemployment, rising energy prices and the increasing number of people relying on foodbanks – all direct results of the way the country is governed and the economy is managed. 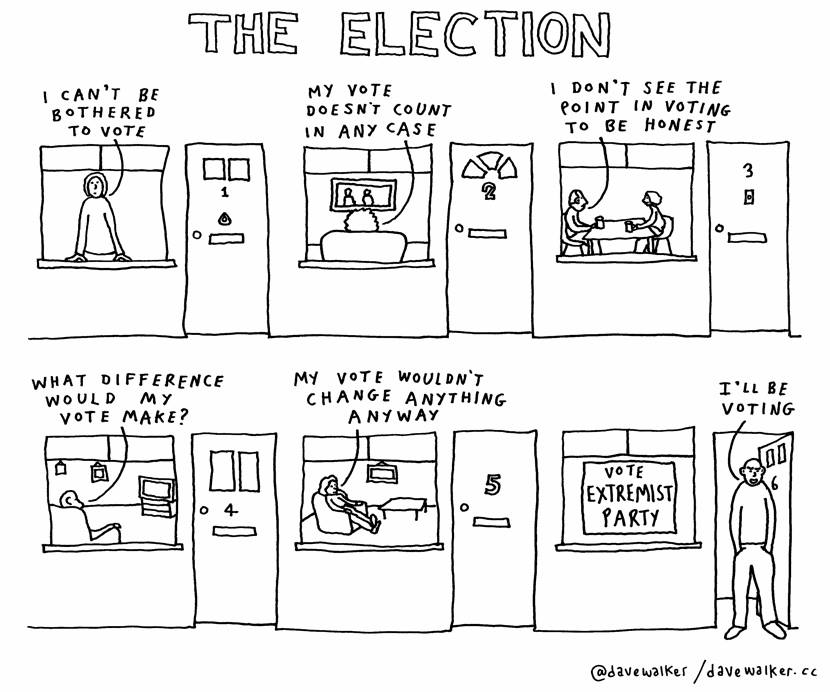 In the 2010 general election, 76% of people aged 65 or over voted, but only 44% of people between 18 and 24. That year, two out of every three white people voted, but only half of non-white voters turned up at the ballot. The politicians know these figures and they make sure their policies are targeted at people who vote and that their activity is directed towards people who exercise the right to remove them from power.

In three weeks’ time, millions of UK voters have the opportunity to keep democracy alive and ensure it plays at least some part in our lives by making sure we use our hard-won right to vote in the local and European elections.

You can break the deadlock – if you turn up.  Our ancestors fought and died for our right to vote. My vote is my voice. The more of us who vote, the louder that voice becomes.

For a full list of local candidates, go to www.birmingham.gov.uk/elections. (Click the link to the Statement of Persons Nominated.)

So what about Europe?

It’s hard enough to know which local candidate comes closest to representing your views in your own ward, but it’s even harder to know which one to choose at European level. Unlock Democracy is a grassroots organisation campaigning for democracy, rights and freedoms. They’ve developed a short quiz that aims to help you find the party that best reflects your political views in the European elections.

If you’re not sure what you think about each question, click on ‘view’ in the ‘tip’ section to see what each party has said about that particular issue.