After the veil has gone 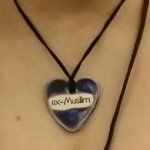 I wouldn’t normally promote Vice, but the Hiba Krisht (aka Marwa Berro) interview about the Ex-Hijabi Fashion Photo Journal is excellent.

The interview is the first time Hiba publicly associates her real name with her ex-Muslim work. The sense of shame she sets out here transcends the specific language and will doubtless resonate with many women’s experience:

The Arabic word used in Islam to refer to body parts that must be covered up is ‘awrah (عورة), a word whose root means defectiveness, imperfection, blemish. In Arabic, women’s uncovered bodies are also referred to as fitnah (فتنة) to describe their temptation, the same word we use to refer to sedition, civil strife, and discord. These are words we grew up hearing in reference to our bodies and selves.

But my body is not an object of discord to be covered up. Many of us have left Islam or rejected its modesty norms because we refuse to be treated as such, refuse to have our hair and limbs hypersexualized to the point that we are considered a danger and temptation simply for having them where eyes can see. The move to celebrate the body and reject doctrines of modesty is one that I have seen openly embraced by many religious people as well.

The The Ex-Hijabi Fashion Photo Journal is on Tumblr.