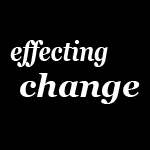 So, I might say that this knowledge has affected my ability to distinguish between the two words so I don’t suffer the embarrassing effects of a mistake.

But, the word effect can also be a verb. The Oxford Dictionaries online gives the meaning as ‘to cause (something) to happen’ or ‘to bring about’. So, for example, I might say I have effected a new plan for 2012.