Doris Lessing wrote The Golden Notebook in 1962. An experimental, non-chronological novel, it examines identity and the arc of a woman’s life through its overlapping structure and political and personal themes of Communism and the Cold War, female liberation, motherhood and mental breakdown. Some of the taboo-breaking carries forward and feels progressive even now in depictions of ‘free women’ and their ‘castrating’ feminism, the exploration of the ‘colour bar’, the internal struggles of the British Communist Party and the mental turmoil brought about by a child’s leaving and a mentally ill lover.

In her attempt to avoid chaos, Anna Wulf, formerly Freeman, the central character, keeps four notebooks: black for her six years in then Southern Rhodesia in the 30s and the setting for her own bestseller Frontiers of War, red for her experiences in the Communist Party, yellow for the novel she’s writing about the love affair of her alter ego Ella, and a blue personal diary. 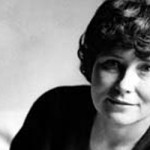 The narrative Free Women is the story of Anna’s life with her daughter Janet, her friend Molly and her son Tommy, her various, often married, lovers, and her psychoanalysis with Mrs Marx, whom Anna designates Mother Sugar. The fifth, golden notebook contains her attempt to tie all the pieces of her life together as she slowly experiences a kind of disintegration.

Lessing’s depictions of women’s sexual and emotional lives, including women largely being treated and acting as appendages to men’s lives, Anna’s revulsion towards her own menstruation, her feelings of worthlessness, promiscuity, homosexuality, and incest, were undoubtedly shockingly novel and liberating in the 60s. Some of Lessing’s theorising about the way women love, their happiness and their ability to achieve a ‘real’ orgasm only with a man they love seems quaint 50 years on, but it’s easy to forget that this is not a memoir, Doris being Anna being Ella. Anna is every bit a creation as Ella and her character is the vehicle used to explores Lessing’s philosophical ideas, an ambitious task for a woman in the 60s, not the personalised embodiment of a set of concrete views.

Lessing faces difficult social dilemmas head on without moralising about her character’s internalised norms. As Margaret Drabble said on the novel’s fiftieth anniversary, ‘Experienced women had not written openly like this in the history of literature. It must have been terrifying. The pact of polite silence had been broken for ever.’

Lessing’s honest analysis of the essential personality of the character’s mind is timeless and powerful: the reason for existence, the need for love, finding purpose in life, and time and work and art, universally elemental themes reserved mostly for the realm of men until the 20th century. Men, it is said, view the themes of their lives and work as objective and broad – grand achievements, universal themes, panoramic historical narratives – and women confine themselves to narrow, subjective emotions and domesticity. This novel proves that whatever their social confines, women are likewise caught up in the existential tangles of life, meaning and death.

Rachel Cusk, Canadian novelist, said, ‘The narrative’s remarkable construction, through which its ambitions “to talk through the way it was shaped” are so brilliantly realised, was – when it first emerged – subjected to precisely the reductive reading against which it militates.’

A mirroring indeed of women’s lives. The Golden Notebook is a formidable, if easily dismissed, book only slightly showing its age, much like the heroine of its pages.

Some other golden things

The best explanation I’ve read is from the Golden Number website:

Not only is this a beautiful piece of maths, it pervades nature, art and design, appealing to scientists and mystics alike.

British lawyer, judge and Labour politician John Sankey gave his name to the Sankey Declaration of the Rights of Man. Sankey’s judgement in Woolmington v DPP [1935] is famous for declaring the duty on the prosecution to prove the prisoner’s guilt beyond reasonable doubt. The judgement stated:

This judgement is usually referred to as the ‘golden thread’ speech.

The Greek hero Jason and his infamous band of Argonauts sailed to Colchis in the mythological tale of their quest to find the Golden Fleece. It’s a complicated story, but essentially, Jason’s uncle, King Pelias, meant to entrap Jason, because of his claim to the throne, by asking him what he would do if there were a man in his power who you had reason to believe would ruin and slay him? Jason replied that he would send him on the implausible quest for the Golden Fleece. Jason bargained was that, should he succeed and return, the throne would be surrendered to him.

How the golden-haired ram’s fleece became so desirable is another story, but on Jason’s return, his wife Medea conspired to have King Pelias killed so she and Jason fled to Corinth and lived in exile.

The golden goal rule used to determine the winner at the end of a football match, in a knock-out tournament, where the scores remained level in a type of sudden death. The golden goal rule stated that the first team to score during a 30-minute period of extra time would immediately be declared the winner and play would end. Introduced by FIFA in 1993, it was hugely unpopular and was replaced by the silver goal rule in 2002.

The basic proposition of the Golden Rule or ‘ethic of reciprocity’ is that one should always treat others the way you would like others to treat you, or, in its negative form, not do to others what you wouldn’t like done in reverse, otherwise known as the silver rule.

Dating back to antiquity and predating the term, the principle has been expounded by philosophers, sociologists, psychologists and religion as an expression of empathy, a recognition of the other as a ‘self’, a manner of treating others with consideration, and an attitude of equal respect. The ethic of ‘doing unto others’ is found across a range of human cultures and traditions, the earliest written form being that found in the priestly law of Leviticus 19:18:

You shall not take vengeance or bear a grudge against your kinsfolk. Love your neighbour as yourself: I am the LORD.

The phrase is also used to indicate a basic principle which should always be followed.